You are here: Home / Reviews / Fat burner reviews / Alpha Lean 7 Review: Only 1 Capsule? Is that effective?

To be alpha is to command the attention of the people around you without any real effort. Your sheer presence is enough to make them look at you and think “Damn, that guy is alpha af!”

Essentially, anything with the word “alpha” is something that is actually not alpha. I mean, if you’re so alpha, you wouldn’t have to tell other people “Hey, I’m alpha!”

With a formula that is claimed to be exclusively for pros and advanced users, Alpha Lean 7 fat burner comes in and tells every other fat burner to shut up and listen to what it has to say. 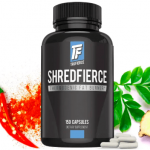 Why is ShredFierce by TruFierce considered the #1 fat burner right now? For starters, there are zero proprietary blends, so you know exactly what you're putting in your body. Second, their formula is based on science. Every single ingredient is exhaustively research-backed and dosed properly. Third, hundreds of men have already gotten amazing results with it. Benefits include: Learn more: visit ShredFierce official website 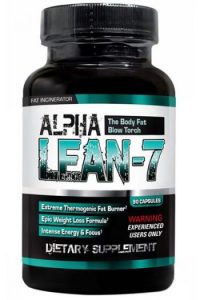 Alpha Lean 7 fat burner claims it’s something only for the advanced and experienced. They describe themselves as a product that initiates a violent assault on the body. Quite a scary description for a supplement that wants to help you. They also use buzzwords like arsenal, weaponry, fitness warriors, and divine physique.

To date, that is the first time I’ve seen those words in one sentence. That’s a sign of pretentiousness, and being pretentious needs a lot of backing. So, I hope Alpha Lean 7 fat burner can walk the walk. 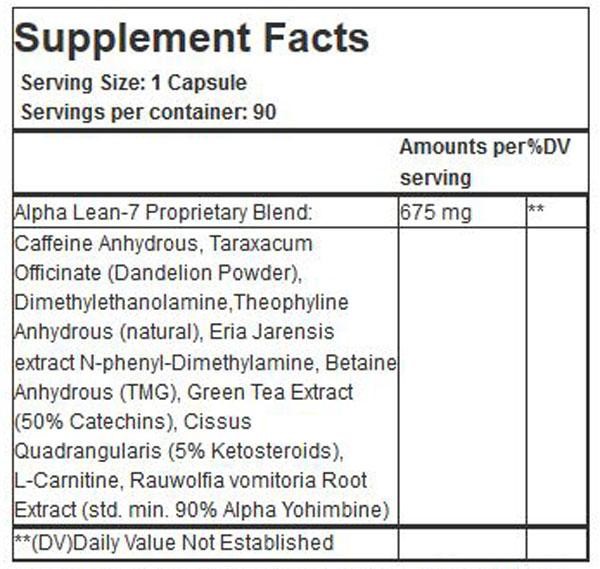 Directions: Take 1 capsule in the morning and 1 capsule 6-8 hours later. Start with 1 capsule to assess tolerance.

Alpha Lean 7 fat burner has the kind of formula label that I really, really dislike.

First, it doesn’t look professionally done. Like, at all. That label doesn’t even look like it was done using FDA standards.

Second, I really can’t get the reason behind using a prop blend in this day and age. Bro, no one’s going to copy you. Your formula isn’t original and even if it is, there’s a good chance you probably copied most of it from another product anyway.

Lastly, the way the ingredients were just bunched up together like that is just disrespectful. It’s messy and just not easy on the eyes.

Labeling aside, the formula contains ten ingredients in total, contrary to what I thought would be seven total ingredients because of the Alpha Lean 7 fat burner name. Now, imagine stuffing 10 ingredients inside a capsule with a total serving size of 675 mg. You can just imagine the problems that would entail.

The dose is probably next to nothing given its hierarchy in the formula ladder. Not to mention l-carnitine is known to work in minimum doses of at least 250 mg.

Alpha Lean 7 fat burner is a stim-driven mess of ingredients that still probably works on fat burning. Seriously, the 675 mg dose over 10 ingredients was a bad start and it was further exacerbated by the fact that Alpha Lean 7 fat burner made use of dose-hungry ingredients. Pretty much, half the blend is either non-functional or working minimally. Yet I still think it works, especially (and much to my dismay) because it’s stim driven.

I like how Alpha Lean 7 fat burner made use of popular fat burners in their formula. The likes of caffeine, green tea extract, yohimbine, and betaine are welcome additions for sure.

Their angle on burning fat without losing muscle isn’t as strong as some of its competitors, but at the very least I like how Alpha Lean 7 fat burner recognizes the need for consumers to not fear losing lean mass along with fat.

There’s also a “health supplement” angle to how Alpha Lean 7 fat burner was formulated. Some of its ingredients aren’t really fat burners per se, but more about supplements for overall cardiovascular health.

I really disliked the fact that they used a prop blend and decided to start the formula with a standard stimulant. This makes it too risky to even try double stacking or taking two caps at once. They recommend two caps a day, but we would never know if it was safe to take the two caps in one go.

Speaking of dosages, what can we expect from a 675 mg blend for fat burning? Not much. Even if the number of ingredients were cut in half, Alpha Lean 7 fat burner’s formula will still not be as potent as it claims to be.

Lastly, there’s also the issue with stuffing non-fat burning ingredients inside a formula that could have gone better without them and not prioritizing fat burning enough.

Alpha Lean 7 fat burner is just a glorified stim-nootro blend. I’m not even sure if it even works as a nootropic despite being fluffed with nootropic-functioning ingredients. The only thing that can work here is the stim, and even that’s a quality not worth mentioning.

So, does Alpha Lean 7 work?

As with many stim-driven burners, Alpha Lean 7 fat burner is effective at giving your body a huge boost in energy that should help stimulate your metabolism. There could be some nootropic benefit, but I wouldn’t bet on it.

Does Alpha Lean 7 have a lot of caffeine?

Gosh darn, I hope not. We don’t see the dosages, and to assume caffeine has at least 300 mg (which is a lot, by the way) is to cut almost half the serving size for one ingredient – an ultimately poor formula design.

So, is Alpha Lean 7 any good or just hype?

Alpha Lean 7 fat burner is more hype than anything. The serving size was the big red flag, but it all went tumbling down after we saw the quantity of ingredients and the prop blend.

As I mentioned earlier, Alpha Lean 7 fat burner is stim-driven. This means it will get your body moving and feeling like it needs to lift heavy stuff for a period of time. This should help you get bigger gains, but that’s it. You might as well just drink coffee, really.

Who is Alpha Lean 7 made for?

Alpha Lean 7 fat burner was made for beginners in both weight lifting and supplement taking. Because I clearly don’t see gym vets and pros buying something that will make them play supplement detective.

Tough to say what caffeine will do to you given the lack of dosage transparency. However, if it’s higher than my 250 mg limit, then you might get a bout of jitters and the crash. There’s also a possibility of feeling nauseated too.

Here’s the thing with Alpha Lean 7 fat burner: It tried to host a party for all the popular people, but just didn’t have enough room for all the guests to mingle and have fun. Their complex blend suffered from a pretentious attempt at being an elite fat burner, stuffing all of those good ingredients inside a capsule that can probably only hold only half.

There’s a lot to be said about supplements that do this despite being in the industry for years, and none of it is good.

At the price of $34.95, Alpha Lean 7 fat burner is expensive. Given the effects it could give you, you’d be better off drinking three shots espresso and hope for the best.