Anarchy is a term used when all hell breaks loose in a country. People fed up with the government burn cars, wreck cars, steal from groceries and retail stores, and basically just riot and do big bonfires at night.

However, MuscleTech thinks the word Anarchy is perfect for their MuscleTech Anarchy pre-workout. Maybe because it sounds cool or it makes you have this rebellious feeling.

As with all things MuscleTech, MuscleTech Anarchy pre-workout is claimed to be the “Strongest Pre Workout Ever Unleashed!”

MuscleTech is quite notorious for selling overpriced “average” supplements, with products filled with over-the-top claims justified by inconclusive or weak scientific studies. However, I’ve been keeping tabs on some of their product reviews and I think they’re trying to steer their marketing in the right direction. Everyone deserves a second chance, bro.

On their webpage, they also did this thing with a table that compares the “competition” to their product. Naturally, MuscleTech Anarchy pre-workout came out on top. I don’t question the obvious bias of these types of marketing tactics, but I do wonder who the “competitors” were. 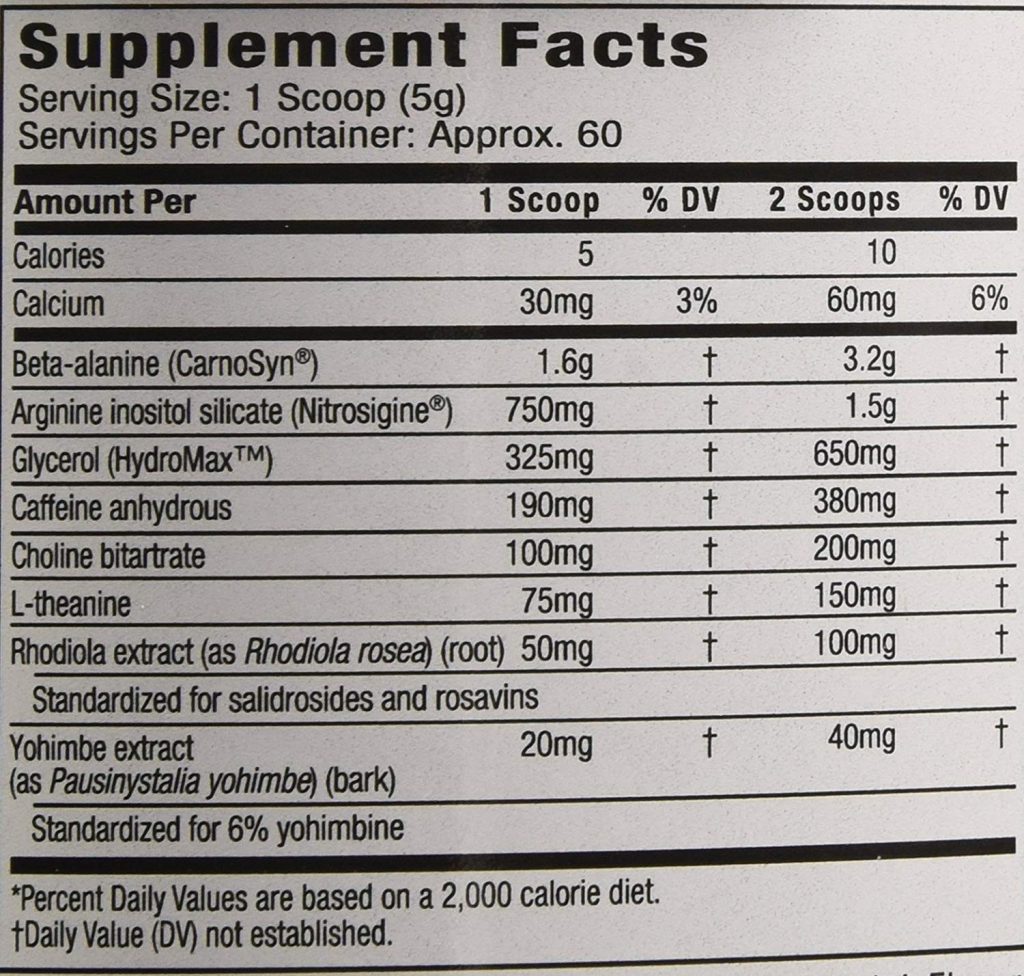 As much flak as MuscleTech gets for their overpriced products, I have to say MuscleTech Anarchy pre-workout is bordering on the good side of decent.

For pumps & strength, we have a premium combination of Nitrosigine, CarnoSyn, and HydroMax. You read that right: Three premium brands compose ⅓ of what makes MuscleTech Anarchy pre-workout work.

Even if the dosage for Nitrosigine is below what we want, the extra oomph added by Glycerol should synergize for pumps that last long. Beta Alanine also provides the raw power and fatigue-busting benefit, making each pump count.

I like that MuscleTech Anarchy pre-workout made use of the tried and tested caffeine-theanine stack, but you really have to level the playing field for theanine, bro. Otherwise, you might not even feel the effects theanine is known for. We also have a tiny 2.4 mg dose of yohimbine. I much prefer we have at least 5 mg of the stuff for better efficacy.

For anti-stress, we got the likes of rhodiola rosea and maybe even choline bitartrate. As much as I want to believe these two will do their jobs, they’re underdosed, choline is in the least bioavailable form, and we don’t even know if rhodiola is really standardized or not.

All in all, I was almost impressed with the formula in general, but the lack of attention to detail threw me off. It could have been a really good pre workout, but it ended up being standard. Not that standard is bad, but MuscleTech Anarchy pre-workout could have been an easy cop at the gym store.

Is it the Strongest Pre Workout Ever Unleashed?

No and it’s not even close. I’ve reviewed supplements at this price range that have higher quality ingredients and dosing. It’s on the right side of the spectrum, though, so that’s always a good thing. It’s strong, but not strong enough to earn that superlative.

So, does MuscleTech Anarchy pre-workout work?

MuscleTech Anarchy pre-workout works by giving you really good pumps that last long. It also works on boosting muscle endurance and giving you loads of energy. The only thing it likely won’t work on is anything related to its nootropic function.

Does MuscleTech Anarchy pre-workout have a lot of caffeine?

MuscleTech Anarchy pre-workout has 380 mg caffeine for 2 scoops. If that’s too much for you, you can use the 1 scoop or even the unmentioned 1.5 scoop which should only give you 285 mg of the stimulant.

So, is MuscleTech Anarchy pre-workout any good or just hype?

MuscleTech Anarchy pre-workout is definitely a bit overhyped. There’s nothing in the formula that would make me buy it over other brands that possess the same formula design, but for cheaper or with better ingredients.

The most benefits to your muscle will come from beta alanine as it’s known to boost muscle recovery significantly, making it a great post workout too like creatine. Pumps can help give your muscle a hand when lifting heavy iron.

The hefty dose of beta alanine is supposed to make you itch, but the CarnoSyn brand states they reduced that side effect. What you should be on the lookout for is caffeine. Even with theanine, the dosage is not enough to mitigate the side effects induced by 380 mg of the popular coffee drug.

MuscleTech Anarchy pre-workout isn’t bad nor is it a standout supplement. It hits more than it misses and is priced reasonably for what it provides. It is adequately dosed for the most part and the ingredients that lacked the proper serving sizes can be considered accessory ingredients, more or less.

MuscleTech Anarchy pre-workout falls a little towards the better part of the industry standard spectrum and for that reason, I think it’s worth buying. It’s just hella boring, though.

If I can improve MuscleTech Anarchy pre-workout, it would be reduce the caffeine and add the weight to theanine. I would also have excluded choline bitartrate and distribute the dose evenly among the remaining ingredients. But hey, that’s just me.