When choosing a pre workout, it’s always a good idea to stick to what everyone’s buying. It’s a safe decision and you’ll most likely get your money’s worth.

When it comes to old brands that everybody seems to like, you simply can’t go wrong with Cellucor’s line up. At least that’s what I’ve been told.

C4 pre workout by Cellucor is what’s in the oven today. It’s a revamped version of their original best selling pre workout. We like the bright yet simple design and we like the idea that they’re dressing up old flagship products.

C4 pre workout is sold by one of the world’s leading brands in supplements: Cellucor. Cellucor has been in the supplement industry for a long time now and does a great job at marketing their line of supplements. They even claim to be America’s #1 selling pre workout because of the number of cans sold since 2014.

So, what’s C4 pre workout all about?

On top of the ones mentioned, C4 pre workout by Cellucor seeks to market itself to either people who are starting their fitness journey or are already up there where all the good lifters are.

If my experience were to be used, you can’t be a supplement for both young and old. New lifters have different needs compared to old lifters. I wonder which audience C4 pre workout really sells to… 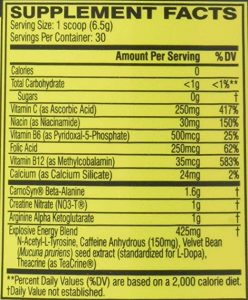 Directions: Take one serving (1 level scoop) of C4® Original, mixed with 6 fl. oz of water 20-30 minutes before training. Some individuals may experience a harmless tingling sensation, which is attributed to beta alanine. USE ONLY AS DIRECTED.

The serving size of C4 pre workout is six grams. For most people, six grams is good enough, but right off the bat it makes us assume we’re going to see a lot of underdosed ingredients. For this C4 pre workout review’s sake, I hope I’m wrong.

What I like about this minor blend of vitamins is C4 pre workout didn’t skimp out on the vitamin forms. B6 and B12 in particular are in their best, most bioavailable forms. Higher bioavailability means better absorption. Better absorption means faster effects.

Performance wise, beta alanine is taken to improve strength (which is always a good thing) as well as delay fatigue. Problem is, it’s just at 1.6 g per serving which is rather small for my taste.

How much help? I don’t really know but I reckon it ain’t going to be that much with just 1 freaking gram!

Oddly enough, C4 pre workout’s blend isn’t composed of the key ingredients, but of compounds that are like minor additions than anything else. The total weight of this prop blend (Ugh!) is just 425 mg, so you bet your ass these are all underdosed.

Even if the angle used was for a “feel good” benefit, it’s still too low, bro.

While we like the idea of adding Theacrine, we think it’s more of a fairy dust at this point.

What is a fairy dust, you ask?

Fairy dusting is the act of adding minute amounts of trendy or popular ingredients in supplements just so they can claim to have it on the label. It works for a lot of bros who don’t know how labels work, but being so low on the list (literally being last) means C4 pre workout literally just sprinkled Theacrine.

I originally thought this C4 pre workout review would end on a positive note, but the ingredients I’ve seen and the dosing they provided makes me want to call C4 pre workout’s company Cellucor right now and scream at them for making such a mess of a pre workout.

From the get go, we have poor dosages of beta alanine, creatine nitrate, and AAKG. Other supplements we’ve reviewed in the past know damn well these three ingredients require a shit ton of dosing to work not because they’re inefficient, but because the body has the tendency to use them up really fast.

Like, I wouldn’t go lower than 2 grams on beta alanine on any one of the three. It would make no sense to go below 2 grams for something like creatine, especially since the standard dosage is 5 grams if taken alone.

Bro, I know synergy when I see one. There definitely is synergy, but synergy can’t be C4 pre workout’s cop out for providing low dosages. And the synergy they want to achieve? It ain’t gonna last 15 minutes.

Maybe for a young dude or some newbie lifter these low dosages will work, but for guys like us? We ain’t kids, man!

Then we have C4 pre workout’s “Explosive” Energy Blend. I put quotation marks on the word explosive because this blend ain’t gonna blow anything up.

Like, we see this blend as something that Cellucor added as an afterthought. They probably had a meeting where they all went “Hey fellas, what should we do to make C4 pre workout sell better?” then some old dude in a suit chimes in “Just add what everybody likes and hopefully no one notices.”

And I’m telling you my dear audience, I bet that’s exactly what happened because I could not for the life of me explain why they even bothered fitting in all these ingredients under 425 mg.

NALT, Velvet bean, and Theacrine are all severely underdosed. Not even sure if they can split 250 mg evenly. They’re not working no matter what you do.

The only one decently dosed among the bunch is caffeine at 150 mg, but even this is pretty weak. Might as well drink two shots espresso because at least two shots will have more caffeine.

Protip: Okay, so you bought this product and you realize it’s not really good. Now you don’t want to throw it away because really, every dollar counts.

So, how do you maximize C4 pre workout by Cellucor? Easy: You double the dose. However, take my advice with a grain of salt as I’m used to doubling doses. If you’re new to supplements, take it slow, bro.

Does C4 pre workout by Cellucor have a lot of caffeine?

Bro, 150 mg is child’s play. Your little sister probably drinks more caffeine when she buys those fancy Starbucks frapuccinos than one serving of C4 pre workout. Weak sauce is what it is.

How long does C4 pre workout by Cellucor take to work?

We don’t doubt C4 pre workout by Cellucor will not take long to work, but we also don’t doubt that it won’t last too long given the dosage given to each ingredient. Sucks balls.

It will still make you feel pumped and help you get gains, but at the end of the day C4 pre workout by Cellucor is just not enough.

Who is C4 Pre Workout made for?

C4 pre workout by Cellucor thinks its market are the serious lifters. We think their market is the new guy who has no idea what he’s doing and thinks any supplement will do. We’re not saying it’s a bad supplement, but what we are saying is it’s a weak supplement.

Because of the low dosage, we’re almost confident enough to say any side effects normally associated with beta alanine or caffeine would be non-existent.

If you do experience itching sensations or jitters, it only means you’re not yet used to these types of compounds circulating in your bloodstream.

C4 pre workout by Cellucor is one of the best selling pre workouts on the planet. Nothing can take that away from them. They’re good at marketing their product and they know which ingredients to include in their formula.

At best, C4 pre workout by Cellucor’s formula is a good base for a pre workout stack. At its worst, only newbies will buy their pre workout and will discard them as soon as they know how supplements work.

If you’re starting out, then I guess I can recommend C4 pre workout by Cellucor. However, if you’re like me and has been around the scene for years, you shouldn’t bother with this product.