Fads and trends can swiftly come in and get taken out just as fast. That’s the nature of today’s generation. However when a product is good enough, it leaves a mark and gains quite the fanbase.

It’s the same with supplements, really. And I think I found one that fans have been clamoring for.

It’s called Driven Sports Craze pre-workout. From what I heard, this is some pretty strong shit and has a massive following for being an innovative and disruptive pre workout.

I just found out that this isn’t the first time Driven Sports launched Craze pre workout. In fact, there’s a lot of controversy and drama surrounding the company. I’ll explain in detail below, but for now here are some product notes:

Directions: As a dietary supplement, take 1-2 scoops with 8-16 oz. of cold water 30-45 minutes prior to training. Start by taking one scoop to assess tolerance and increase the dosage slowly. Some individuals may find 1, 1.5, or 2 scoops is the ideal dose pre-workout. To avoid sleeplessness, do not take within 6 hours of sleep. Contents may settle after shipping. Shake container prior to each use. Store in a cool, dry place. DO NOT EXCEED 2 scoops in any 24 hour period. 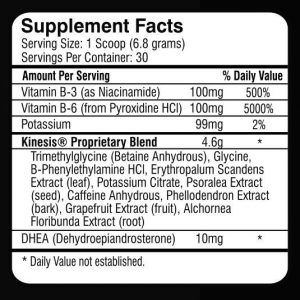 I don’t like prop blends, bro. I never expected to find a prop blend in my Driven Sports Craze pre-workout review, given the many fans of this product, but looks like we’re going to have play the guessing game.

Vitamin B3, B6, and Potassium. B-complex additions are normal additions in any pre workout because these vitamins are depleted rapidly during training. The tiny-dosed potassium must’ve been from one of Driven Sports Craze pre-workout’s other ingredients.

Other than the whole “this is meth, bro!” it’s also controversial because it has side effects like spiking blood pressure and heart rates. The FDA really hates it, but it’s a bonafide fat burner nonetheless.

BPEA also doubles as a nootropic that helps us feel happy despite the heavy sets. For dosage, maybe 500 mg.

Then we have a totally separate ingredient.

In 2013, researchers found out the first CRAZE pre workout contained a compound called N,a-diethyl-phenylethylamine or N,a-DEPEA, a methamphetamine analog which is found to be dangerous for the heart.

What made it worse is the fact that it wasn’t even listed in their ingredients list as well as the fact that one of Driven Sports’ officials is a convicted felon with a history of selling dangerous dietary supplements. Driven Sports naturally denied the accusations, saying their product was clean and is safe and effective. Despite their argument, Driven Sports was eventually forced to halt production of CRAZE due to media reports.

Fast forward to 2015 and we have CRAZE v2 pre workout. The new version removed controversial (but legal) substances Dendrobex and Citramine along with BPEA and substituted safe nootropic alternatives.

I guess you can say, CRZ the OG pre workout is the “clean” version of the first Craze pre workout, and their latest attempt at grabbing the name is a marketing ploy to get their original customers back, especially the ones who didn’t like Craze v2 pre workout.

Driven Sports Craze pre-workout is known to try really unconventional stuff for their supplements. While they may have been banned for this sort of formulating strategy, you have to respect that.

So, we basically have a muscle builder and feel good blend in Driven Sports Craze pre-workout. I kid you not: More than half the blend is all about making you feel happy and relieved.

Betaine seems to be its only real performance and muscle enhancer, caffeine the only real energy source, and the rest either help delay fatigue or make you ignore the pains of lifting weights.

Dosage-wise, I’m almost sure the dosages are added where they count the most, but after caffeine, I doubt the last three ingredients have more than 150 mg each, maybe 300 mg total. (To be honest, I really hate guesswork, but prop blends bro.)

Does Driven Sports Craze pre-workout review have a lot of caffeine?

I’ll wager the caffeine in Driven Sports Craze pre-workout is between 200-250 mg.

So, is Driven Sports Craze pre-workout review any good or just hype?

There is definitely a lot of hype given that they literally rebranded to cater to the hype. With that said, the ingredients they use are pretty weird and I’m not really sure I know someone who uses this type of formula.

It works, don’t get me wrong, but I fail to see this to be any better than a standard pre workout that uses standard ingredients.

Betaine is known to generate the necessary stuff to produce creatine and some of Driven Sports Craze pre-workout’s other ingredients should help you train longer. More training plus creatine production = gains. Well, not much but good enough.

Who is Driven Sports Craze pre-workout made for?

I think it’s made for two types of customers: The Craze pre workout fan (the first formula) and the experimental user.

The first one is obvious, the second one is more complex and probably knows what they’re doing and pretty bored with “clean” stuff.

I like to think caffeine’s dosage is adequate and any side effect should be mitigated by the nootropics. The main concern here is BPEA with its cardiovascular side effects and the fact that it has probably at least 500 mg dosage.

For my Driven Sports Craze pre-workout review, I think Driven Sports has good intentions and marketing tactics, but they underperformed on the actual product. It has potential especially since it tries to deviate from the boring norm, but they didn’t do it properly. I personally would’ve removed an herb or two and add the dosages to betaine if only so my creatine production is higher.

Although I do like the whole “We’re different and only for the tough guys” sort of marketing they do. I definitely get the appeal. Anything that sounds dangerous is always something you gotta try at least once, right?

I also like that the blend is focused and generally works with any type of customer, but I also find it hard to see this flying off shelves with that price tag.