At some point, we all watched an episode or an entire series of anime. There’s no shame in that; I think of anime as cartoons for cool people. One of the most iconic characters in the whole anime kingdom is Goku, the main hero of the anime Dragonball.

Dragonball is all about fighting and powering up to beat the other dude. The anime features a lot of muscle, explosive fight scenes, and lots of screaming. I call that Friday nights inside the gym.

Furious Labs Goku Gains Pre-Workout wants to capitalize on Goku’s dominance and popularity by using his name for their brand. A bold move because though anime is popular, I’m not sure if enough lifters know who Goku is. 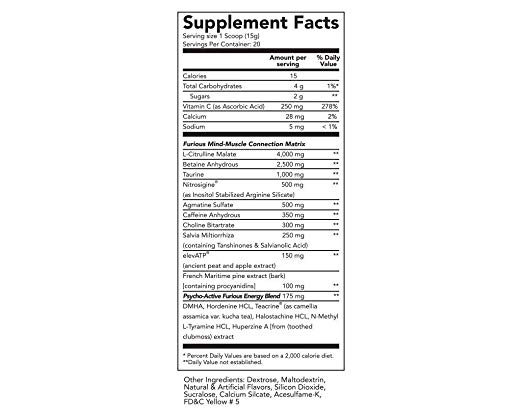 Start by assessing your tolerance; as a dietary supplement, mix one-half a serving (1/2 scoop) with 6 – 8 oz. of cold water, and drink about 30 minutes before your daily workout. Then increase the dosage to 1 full serving (1 scoop) mixed with 10 – 12 oz. of cold water before your daily workout. Do not exceed 2 servings (2 scoops) in a 24-hour period. Drink 8 glasses of water daily.

Okay bro. I’ve watched Dragonball before and I really liked how manly everything was. Everyone was just punching the other so hard, planets get destroyed and super explosions ruin entire universes. With 15 grams per serving, I’m literally expecting something like that with regards to the ingredients and formula Furious Labs Goku Gains Pre-Workout offers us.

This is Furious Labs Goku Gains Pre-Workout main blend. It has some of the key ingredients I would expect from a pre workout that takes Goku’s name and made it their own. Let’s hope they did the dosing justice.

This blend seems to be a rough combination of nootropics and fat burners to add energy support. It’s in a prop blend, so it’s anyone’s guess as to whether or not Furious Labs Goku Gains Pre-Workout gives us the right dosing for each one.

You will feel like Goku alright. Furious Labs Goku Gains Pre-Workout has a lot of potent ingredients that will have you ready to fight a big bad alien!

I’m loving the super pumped formula of their Furious Mind-Muscle Connection Matrix. The Citrulline malate dosing is already great, but to have betaine, taurine, nitrosigine, and agmatine all with respectable dosages acting as pump and endurance support? That’s the kind of overkill I want to have in my pre workouts!

There is also more than enough energy from caffeine, bro. At 350 mg, get ready to have the need to expend all that energy. I personally think 250 mg is a good max, though, because any higher and you may experience a bad case of jitters, sweats, and even the dreaded crash!

As good as the blend is overall, I can’t help but just hate the addition of choline bitartrate, elevATP, salvia, and pine bark. Choline has the worst ingredient form for bioavailability, salvia is not the first ingredient to come to mind when it comes to blood flow-bioavailability benefits, elevATP isn’t good enough without creatine, and pine bark is low dosed and not even standardized.

As for their Psycho-Active Furious Energy Blend, I only have one question: What is up with Furious Labs Goku Gains Pre-Workout and banned stuff?

Like, I get the appeal of having controversial ingredients in your blend (we’ve all considered those ingredients at least once), but to have more than one? I think that’s overkill especially since the banned ingredients pretty much do the same thing under a different name.

I get the use of hordenine, teacrine, and huperzine as these are all sound additions as clean stimulants. I also understand adding DMHA, but what I don’t get is why not just focus on DMHA and pump it up with doses instead of using other banned substances to fill the serving size?

It’s also ironic how Furious Labs Goku Gains Pre-Workout, a supplement named after an anime character that likes to compete in professional fighting sports, doesn’t want you anywhere near anything competitive.

Based on my analysis, Furious Labs Goku Gains Pre-Workout is a really super pumped pre workout that gives you boatloads of physical and neural energy, but you don’t want to take this if you ever plan on going pro, bro.

It works for super pumps, a good boost of energy, and a good enough “feel good” sensation. The dosing greatly supported the ingredients in the formula.

Does Furious Labs Goku Gains Pre-Workout have a lot of caffeine?

So, is Furious Labs Goku Gains Pre-Workout any good or just hype?

The hype is justified. Representing Goku’s name in a supplement has never looked so intense, yet I also wish they tweaked some of the stuff I nitpicked.

You will get all the pumps you need for your workout. Those nitric oxide boosters will make you want to feel like lifting everything including the spotter. For post-workout effects, it should have some benefit for muscle repair and growth, but not so much since Furious Labs Goku Gains Pre-Workout is without creatine and beta alanine.

Who is Furious Labs Goku Gains Pre-Workout made for?

The first guess is for anime fans since I know far too many lifters who get their inspiration from Dragonball characters. The second guess are for hardcore lifters who don’t care about competition and want to see why banned substances were banned in the first place.

Caffeine is your main concern. At 350 mg, you might experience jitters, nausea, crashing, and even a bad case of sweating. After caffeine are the banned stimulants.

Unfortunately, I don’t know the dosing, so I can’t say if they’re in tolerable doses. However, if you have to know these ingredients were banned because they’re associated with high blood pressure and elevated heart rates among other side effects.

With all that said, there are many flaws in the formulation stemming from unnecessary ingredients and the controversial nature of some of their stimulants. However, if you can ignore those issues (as well as be ready to spend more cash than usual), Furious Labs Goku Gains Pre-Workout might be the best gym supplement for you.