You are here: Home / Articles / Meal Frequency Facts: How Many Meals Should You Eat Each Day to Get Ripped? 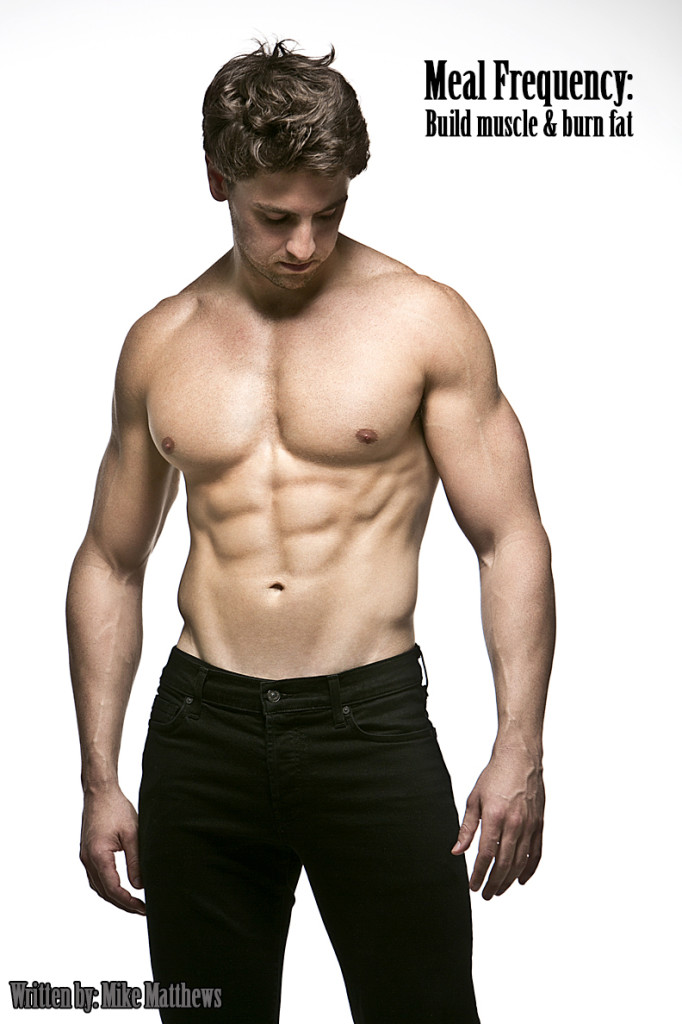 The claim that you need to eat many small meals per day to “stoke the metabolic” fire and accelerate fat loss and control hunger, has been part of the mainstream diet advice for quite some time.
It seems to make sense at first.

When you eat, your metabolic rate increases as it breaks down the food. Thus, if you eat every few hours, your metabolism will remain in a constantly elevated state, right? And nibbling on food throughout the day should help reduce hunger, right?

Well, like many of the myths that seem to make sense on paper, they just don’t pan out in clinical research.

Meal Frequency and Your Metabolism

Each type of macronutrient (protein, carbohydrate, and fat) requires varying amounts of energy to break down and process. This is the thermic effect of food, and is the metabolic “boost” that comes with eating.

The magnitude and duration of that boost depends on how much you eat. A small meal causes a small metabolic spike that doesn’t last very long, whereas a large meal produces a larger spike that lasts longer.

So the question, then, is if more, smaller meals per day increases total energy expenditure over a 24-hour period than fewer, larger meals.

Well, in an extensive review of literature, scientists at the French National Institute of Health and Medical Research looked at scores of studies comparing the thermic effect of food in a wide variety of eating patterns, ranging from 1-17 meals per day. In terms of 24-hour energy expenditure, they found no difference between nibbling and gorging. Small meals caused small, short metabolic boosts, and large meals caused larger, longer boosts, and by the end of each day, they balanced out in terms of total calories burned.

We can also look to a study conducted by the University of Ontario, which split into two dietary groups: 3 meals per day and 3 meals plus 3 snacks per day, with both in a caloric restriction for weight loss. After 8 weeks, 16 participants completed the study and researchers found no significant difference in average weight loss, fat loss, and muscle loss.

So, while increasing meal frequency can make dieting more enjoyable for some, it doesn’t help us burn more energy.

A study conducted by the University of Missouri with 27 overweight/obese men found that after 12 weeks of dieting to lose weight, increasing protein intake improved appetite control, but meal frequency (3 vs. 6 meals per day) had no effect.

The University of Kansas investigated the effects of meal frequency and protein intake on perceived appetite, satiety, and hormonal responses in overweight/obese men. Unsurprisingly, they found that higher protein intake led to greater feelings of fullness, and that 6 meals actually resulted in lower daily fullness than 3 meals.

On the other hand, you can find studies wherein participants were less satiated on 3 meals per day, and found that increasing meal frequency increased feelings of fullness and made it easier to stick to their diets.

The bottom line is that there are many variables involved, including psychological ones, and clinical evidence shows that it’s incorrect to conclusively state that either more or fewer meals per day for hunger control will be best for everyone.

So How Many Meals per Day, Then?

You might be surprised to learn that I often recommend that people eat fewer, smaller meals per day.

Because, in my experience coaching hundreds of people, many are like me and prefer the feeling of more, smaller meals as opposed to fewer, larger ones. I personally don’t like eating 800-1,000 calories to then feel stuffed for several hours. I much prefer a 400-calorie meal that leaves me satisfied for a few hours, followed by another smaller meal with different food, and so forth.

As the cliché goes, the best dietary protocol is the one you’ll stick to, and reducing psychological stress goes far in increasing diet compliance and thus overall effectiveness.

That said, if someone can’t or doesn’t want to eat frequently, then we work out a meal plan with fewer, larger meals that fits their preferences or lifestyle. Our hunger patterns are established by our regular meal patterns, so it’s usually easiest to work around this, not against it.

Mike Matthews is a bestselling health and fitness author

that’s on a mission to help everyone achieve the bodies of their dreams. You can find him and his work at www.MuscleForLife.com.