Morphing your body to that of a powerful warrior is by no means something you can simply promise to yourself on New Year’s Eve and have it checked by the end of the following year. I mean, if building powerful muscle was that easy and straightforward, there wouldn’t be a need for bloggers like me.

As difficult as bodybuilding is, supplements are out there to make life inside the gym a little bit easier. One of these supplements is Mesomorph pre workout. It’s been getting a lot of good reviews lately and for all we know, Mesomorph might just mean “ Bro, I got all the muscles in this can.”

Based on what we found, they might be onto something there.

Mesomorph pre workout tells us right off the bat that it is the ultimate pre workout complex ever, claiming that it is capable of unleashing our true “genetic” potential.

It definitely sounds like something out of a Marvel movie (Do you even Hulk, bro?), but I gotta admit it does have quite a powerful ring to it.

The official mesomorph pre workout website also states how their formula works and some reviews. Between you and me, I think reviews on actual product sales pages are bullshit. I really appreciate the whole “science” touch, though. At least they try to explain the more technical side of their flavored powders. 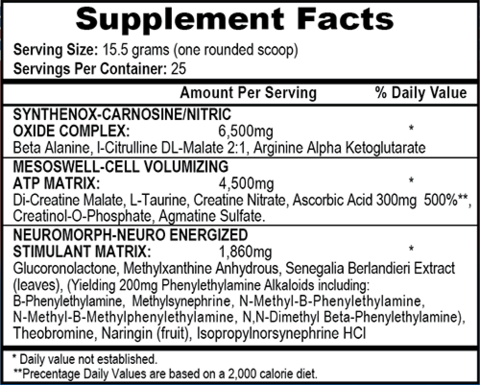 Directions: Once tolerance has been determined, mix one scoop of Mesomorph® with 8-10 oz of water, stir adequately, and consume on an empty stomach approximately 30-40 minutes prior to exercise. On non-workout days, consume 1/2 scoop Mixed in water on an empty stomach.

Mesomorph pre workout’s SYNTHENOX blend seems to focus on just one thing: RAW LIFTING POWER and lots of it.

This blend revolves around energy, but not the kind that spills caffeine on it. Nope, Mesomorph pre workout does not put caffeine at the center of its energy blend, so it currently has the liberty to claim reduced crashing and/or jitters. But if there’s little caffeine, what does Mesomorph pre workout rely on?

As I was doing research before writing my Mesomorph pre workout review, I came across some really old labels.

To be completely open, I always compare the difference between old and new labels just to see if there’s any stark changes to a supplement’s formula. In the case of Mesomorph pre workout, there was.

So what was the big change?

The big change revolved around the one ingredient that put Mesomorph pre workout at the top: DMAA.

I’m sure you know by now, but in case you’ve been living under a rock, DMAA is a really potent stimulant and fat burner. Like, super, super potent. It’s so potent, it gives off false positives for competing athletes.

Because of false positives, as well as some claims of heart issues after taking DMAA, the FDA has since banned this substance in supplements all over.

The old Mesomorph pre workout’s formula is more or less the same with what we have now save for some changes in their energy blend. The old formula still used the chemical name of theobromine as 3 7-dihydro-3 7-dimethyl-1h-purine-2 6-dione and of course DMAA under the brand Geranaburn.

The new Mesomorph pre workout, as we listed, retains the same blend dosage minus DMAA. It has been since replaced with other, safer alternatives to make up for the loss in stimulant power.

Why is DMAA banned in supplements?

The official statement from the FDA regarding banning DMAA are as follows:

The FDA also notes that DMAA consumption can cause shortness of breath, arrhythmias, tightening in the chest, heart attacks, and even seizures. 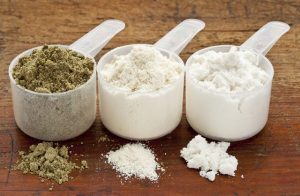 So, Mesomorph pre workout was nerfed. Like, nerfed to the point where many of its fans are now concerned whether the stuff works as good. Despite the rampant prop-blending we encountered and the vague and likely-underdosed dosages in the formula, we like to think Mesomorph pre workout still has a shot to be a great pre workout.

Here’s how it works:

The SYNTHENOX blend is filled with performance enhancers matched with fatigue busters. At a disclosed dose of 4, 000 mg, the amount of Beta alanine should help compensate for the smaller than standard dosing of citrulline and AAKG.

MESOSWELL is not the primary blend, so we can at least cut it some slack regarding dosing. The creatine dosing in all three of them are likely still below standard, but as far as cell volumizing is concerned, especially with taurine on their side, we think it does the job good enough.

NEUROMORPH may have lost the ultra potency provided by the once powerful DMAA, but we t

hink the addition of Isopropylnorsynephrine HCL and Senegalia somehow captures similar effects. These two ingredients work kinda like how DMAA once did minus the side effects the FDA doesn’t like.

So what do we have?

We don’t see this as a top tier pre workout, but we also can’t brush it off to the side. Mesomorph pre workout works as advertised, though the potency may be lacking for hardcore lifters who want more oomph per serving. There’s a focus element on the blend too, but it definitely relies on how sensitive you are to phenylethylamine.

However, if you’re after something that does the job well enough then Mesomorph pre workout might just be the can you’re looking for.

We’re not entirely sure how much caffeine it has, but if the prop blend is any indication, we’re assuming at least 250 mg here which I think is a fairly good dose for those looking for a good buzz.

For the side effects, maybe the Senegalia’s mood-boosting properties can help you cope with them, but don’t take our word for it. I personally am used to drinking four shots of pure espresso in one go, so 250 mg of caffeine ain’t nothing to me.

If you’re one of those guys who just can’t stand more than two cups of coffee, then perhaps Mesomorph pre workout may come out too strong for you. If it is, then I suggest you follow the directions closely.

You can literally turn this into one of the best pre workouts ever made if you add more citrulline; perhaps two more grams and you’re good to go.

I don’t think you should add more creatine especially if you have the monohydrate type as it might interfere with the synergy and overall bioavailability. There’s also the issue of bloating if you take too much creatine. 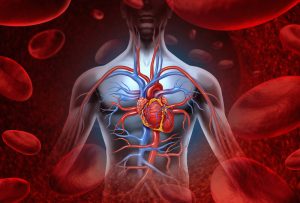 I’ll be damned if you don’t feel like lifting hard iron overhead after a scoop or two of Mesomorph pre workout.

It definitely raises your strength to gym-lifting levels as well as make you not just lift heavier, but also lift more. This gives you more bang for your buck with every serving if you do things right.

Who is Mesomorph pre workout made for?

It’s definitely made for the fans of the old Mesomorph pre workout. Having a really potent yet effective substance banned is no one’s liking, and I’m sure the company hated having to reformulate too after making tons of cash on their old formula.

It’s also made for those who want to try something “hardcore,” because let’s face it: anything with “-ephrine” on the label is not exactly for the kids. So no, it’s not your “noob” pre workout.

Now that we know it’s great for the gym, how about the other stuff it wants you to do?

The side effects you will experience will likely come from the stimulants or the beta alanine.

Caffeine and Isopropylnorsynephrine HCl are known for their stimulatory properties, so expect palpitations and maybe some real heavy sweating. If you’re not a fan of caffeine, you may also experience nausea and headaches.

On one hand, Mesomorph pre workout seems to have backed itself into a corner because the FDA hates the one ingredient that made them a favorite. On the other, I think it’s amazing what their researchers are capable of when looking for alternatives.

Based on our Mesomorph pre workout review, we think their combination of pump, endurance, and focus and energy would work well in any training situation. The only possible flaws they have can be easily remedied by stacking with a scoop or two of citrulline or other muscle pump boosters you may have lying around.

Overall, we think Mesomorph pre workout is a good product for those who know what they’re getting into and what to expect.