An explosive workout is a workout where you crushed every rep in every set, hitting your max and going beyond it. This type of workout gives you the best feelings in the world.

Six Star Explosion Pre-Workout is a supplement that wants you to keep on doing more explosive workouts. It claims to get you pumped, energized, and feel strong from start to finish. From the label, I see all the ingredients I’ve been reviewing in other, premium pre workouts so it won’t be an exaggeration to say that I’m really looking forward to reviewing this popular supplement.

Six Star Explosion Pre-Workout markets itself as something that provides extreme energy, focus, and intensity. They claim to be perfect for athletes, lifters, casual gym goers, and even bodybuilders. It’s available in Icy Rocket Freeze, Fruit Punch, and Pink Lemonade.

Let me also add that from their website, they say Six Star Explosion Pre-Workout is “precisely dosed with arginine AKG, beta-alanine, creatine and caffeine to provoke peak performance.” We see the bottle and it definitely looks like it’s dosed well, sporting 3 g of beta alanine, 3 grams of creatine, and more than 2 grams of AAKG. When you see these three with those dosages, you can’t help but have goosebumps.

Directions: Read the entire label before use and follow directions provided. Assess your tolerance by mixing 1 serving (1 scoop) with 6 oz. of cold water and drink about 30 minutes before your workout. Then increase the dosage to 2 servings mixed with 12 oz. of cold water before your workout. Do not exceed 2 servings (2 scoops) in a 24-hour period. Drink 8 to 10 glasses of water daily for general good health. 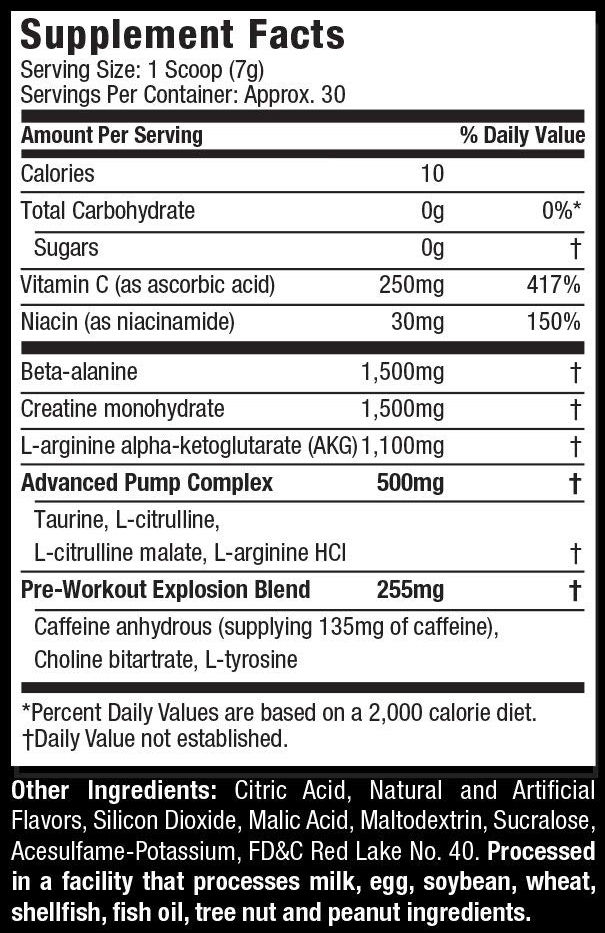 Six Star Explosion Pre-Workout looks focused and short, but I see potential here because of the doses indicated on their label. I sure hope I didn’t get clickbaited.

We only get 1500 mg of the supplement of industry’s favorite ergogenic.

I’m assuming this blend acts as nitric oxide support to the AAKG they provided. I do hate the fact that it doesn’t have the dosage I would have wanted in a pump-blend and the fact that it’s a prop blend. To hell with that kind of marketing practice.

Problem is, there is no way in hell even one of the three is dosed at the minimum effective dosage. I also think these were fairy dusted and were last-minute additions for the sake of marketing.

I immediately thought this was their energy blend, but then I saw the dosage and ingredients and it made me think “what the hell were they thinking?”

Too bad we only have 135 mg of caffeine. That is weak sauce, bro.

Based on what I’ve seen so far, I definitely got clickbaited. The dosages on their label was clearly for the two-scoop recommendation. Bro, that is so not cool!

Man, Six Star Explosion Pre-Workout is a mess for me. They started alright, with their core ingredients having more than half the serving size, but then the whole thing collapsed on itself when they decided to go for adding names just for recognition and marketing sake.

The dosing for beta alanine, creatine, and even AAKG were okay granted there is potential for synergy. If you double the scoop, you get the full numbers on their label. But, that’s where the good times end, bro.

Their pump blend wants you to think four dose-hungry ingredients will work together sharing just 500 mg of space. Each ingredient in this blend easily requires 1 gram each to be even considered working doses.

Then their energy blend tried to blow me away with their puny 135 mg of caffeine and the addition of nootropics that won’t work with dosages below 500 mg. Sure, you can double the serving and get 270 mg caffeine at least, but the nootropics still wouldn’t be considered functional on anyone’s pre workout standards.

What I saw in my Six Star Explosion Pre-Workout review is a pre workout that flat-out uses attractive dosing claims that you won’t get unless you take two scoops. I’m not saying its fraud, but it’s definitely a good way to make people with poor eyesight or don’t know how to read labels buy their product.

Protip: If you want to maximize Six Star Explosion Pre-Workout, you really have to double the dosage right from the start. The problem with doubling is, your product becomes twice as expensive.

Six Star Explosion Pre-Workout works on helping you get a good workout with decent pumps, raw strength, some focus, and a good bit of energy. This is provided you take the two-serving recommendation, bro.

Does Six Star Explosion Pre-Workout have a lot of caffeine?

One serving gives you 135 mg. At two servings, you expect to get at least 270 mg which I think is more than enough for a normal day of heavy lifting.

How long does Six Star Explosion Pre-Workout take to work?

It doesn’t have any ingredient to speed the uptake, but I’d wager Six Star Explosion Pre-Workout shouldn’t take longer than 30 minutes for you to feel anything.

So, is Six Star Explosion Pre-Workout any good or just hype?

I personally think Six Star Explosion Pre-Workout is hyped up until you double the dosage like it recommends.

At the very least, two servings of Six Star Explosion Pre-Workout does have enough oomph for your muscle growing needs. 3 grams of beta alanine and 3 grams of creatine is a really good combination for gains.

Who is Six Star Explosion Pre-Workout made for?

One serving might not be enough to give you side effects, but the two-serving recommendation might just get you some jitters and the crash. There’s also a chance of feeling bloated thanks to creatine as well as the itch provided by beta alanine.

Six Star Explosion Pre-Workout by all accounts isn’t even near the average pre workouts we’ve encountered. For it to be even considered decent means to take two scoops instead of one, and I already hear a lot of complaints because of that hidden requirement.

At its core, Six Star Explosion Pre-Workout is like one of those supplements you should try out only if it’s your first time. It’s not that hardcore and (based on the ingredients) it gives you a general idea of what to look for in pre workouts.

My point is, Six Star Explosion Pre-Workout has all the makings of a great pre workout but chose to remain below it just so they can be sold at a really cost-effective price.

It’s not all bad, though. Other than doubling the dosage, you also have the option to stack it. In fact, their website recommends you stack this with other Six Star products. However, I think all you need to do is add 2 grams citrulline malate and 1 gram of creatine more after doubling the serving to make Six Star Explosion Pre-Workout really work wonders.

If you’re not into stacking or using more than the suggested serving size, I don’t see how I can recommend this to you without feeling guilty afterwards.