Some supplement companies give their products badass name that can sometimes come off as cool and awesome, but often cringey, like an 40-year old trying to hang with a bunch of high schoolers. Cringe or not, we like the efforts they put in naming.

And then there’s Sizzurp by SWOLE MFs pre workout. Yup, the actual name is Sizzurp by a company called SWOLE MFs. I’m not even sure if this is a serious product or not, but I do know they’re not trying to sound cool or badass; just weird and unique, like that obnoxious classmate you had in middle school.

Sizzurp by SWOLE MFs pre workout’s brand is all about weirdness it seems, but like that different dude you know in college, it promises a good time. 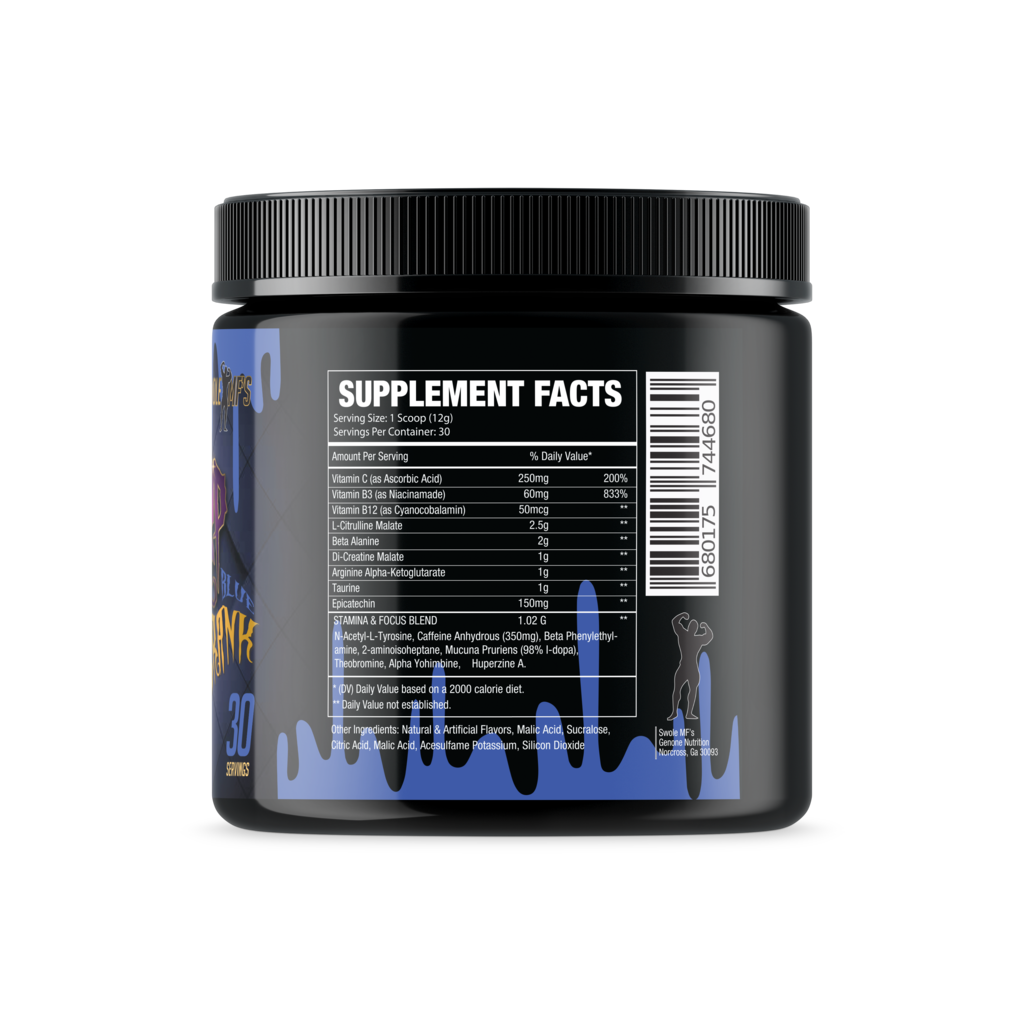 As a dietary supplement, take one (1) scoop with 8-12 oz of water. New users may wish to assess tolerance with 1/2 scoop. Do not exceed one scoop in a 24-hour period.

Sizzurp by SWOLE MFs pre workout divides their formula in two: The first one is transparent, highlighting the driving force of the blend together with their equivalent dosages. The second half is a big ‘ol prop blend composed of what I assume are the accessory or support ingredients with a total serving size of 1.02 grams.

This is a weird way to formulate, but hey it’s the way they market.

I have mixed feelings for Sizzurp by SWOLE MFs pre workout. On one hand, I think it does a really decent job in helping us bros get better with our workouts. On the other, I think they have dosing problems which caters to newbies and not supplement vets like us.

I like how the first half of the formula shows us the exact dosages. We know for a fact that citrulline and beta alanine are nicely dosed. We also know both ingredients are supported by the likes of AAKG and taurine plus creatine malate.

Personally, I would have just removed the second half of the formula, add the caffeine here, and put the rest of the dosing on creatine or theanine and call it a day. In an alternate universe, that would have been a good call on Sizzurp by SWOLE MFs pre workout’s part.

For the second half aka the prop blend, we can assume the dosing for NALT is just fine and upwards of 351 mg because caffeine is dosed at 350 mg. Can we say 400 mg? Maybe. That’s the problem with these prop blends, we’re left to guess for ourselves.

If my assumptions are correct, the second blend is more or less okay for focus and a bit of anti-caffeine benefits, super high for energy, but really not that good for mood improvement.

Combining the two formulas together, we have a formula that gives you decent performance, lots of energy, and a good-enough focus benefit. This makes Sizzurp by SWOLE MFs pre workout pretty average.

So, does Sizzurp by SWOLE MFs pre workout work?

As I mentioned, it works for performance and energy. Not so much on focus and barely anything on mood. The formula pretty much got it right for 60-70% of what the product claims to do.

Does Sizzurp by SWOLE MFs pre workout have a lot of caffeine?

Oh wow, 350 mg is a lot. Like, even I don’t think ingesting more than 250 mg in one shot is good for you. You get all the nasty side effects like jitters, nausea, headaches, palpitations, and even the dreaded crash. Not to mention you also build a tolerance to caffeine if you take this much continuously.

So, is Sizzurp by SWOLE MFs pre workout any good or just hype?

It’s a little bit of both. It does help with the overall gym experience, but I don’t see it as a product that should be recommended or listed on anyone’s top 10 favorites.

Sizzurp by SWOLE MFs pre workout will get you pumped, helped you recover faster, and pretty much give you a surge of energy for a good amount of gains, bro. You won’t get big fast here, but you should still see and feel a difference.

Who is Sizzurp by SWOLE MFs pre workout made for?

I think Sizzurp by SWOLE MFs pre workout is made for newbies and some lifters looking to have a basic base to stack on. The ingredients used are pretty generic, there’s already more than enough caffeine, and it has some nootropic value to it. I can see many falling for this, especially loving the surge of energy which noobs often equate to quality.

For supplement stackers, they can just throw in a scoop of creatine or citrulline plus theanine and call it a day.

You can very well expect some itching here and there, bro. That’s beta alanine for you. But, that’s not what you should be concerned about. Instead, look at that massive caffeine dose. Like, that’s a crazy amount for one shot. You might enjoy the surge of energy, but you are also likely to get the jitters, sweats, and the crash.

Some online sellers carry it, but I’m not sure if you can still buy it freshly made. The official website has discarded the “SWOLE MFs” brand in exchange for a more professional, square name of Active Sports Distribution. So I guess you can say, Sizzurp by SWOLE MFs pre workout is officially dead…RIP bro.

Sizzurp by SWOLE MFs pre workout is at its best an average supplement and at its worst a product that needs a good stacking.

Sizzurp by SWOLE MFs pre workout helps get you pumped, provides a surge of energy, and gives a bit of focus. However, these effects are not in any shape or form extreme or even near what we normally see in potently-dosed formulas.

As I mentioned, Sizzurp by SWOLE MFs pre workout is really an average supplement at most, especially since it relies too much on stims to generate an authentic “it’s working” feel.

I want to say avoid picking Sizzurp by SWOLE MFs pre workout, but the fact that the official SWOLE MFs brand is dead tells me you won’t find this anywhere save for a few sellers holding on to old (and likely expired) bottles.